One Political Plaza - Home of politics
Home | Political Digest | Active Topics | Newest Pictures | Search | Login | Register
The Most Active Discussions Today
How many of these have reared their ugly heads
At CPAC ?
1) Remove or discredit leaders that are principled, courageous, and people of conviction and morality.

2) Entice the brainwashing subjects into questioning and doubting their fundamental worldview values and convictions.

3) Teach a revisionist history that portrays America’s capitalist free-market system as the source of all oppression and suffering.

4) Teach moral relativism and situational ethics in order to destroy morality and character.

5) Teach the importance of group consensus and collectivism, and the danger and consequence of individuality.

7) Put the brainwashing subject into a state of fear, anxiety, confusion, and social turbulence in order to diminish the subjects’ ability to think critically using reason, logic and context. The ultimate goal is to force the subject to surrender his or her values, and worldview to those of the change agents and their controlled and crafted group consensus.

8) Conceal the lies and evil agenda of the propagandist behind masking terms that sound good, but are chosen to shame and manipulate the targeted subjects into willingly embracing their own demise.

9) Use individuals in trusted institutions and occupations to give credibility to the worldview and values being introduced into the brainwashing subjects.

11) Use informants, gossips and tattletales to report on noncompliance and groups.

12) Create an atmosphere and environment of chaos, suffering, hopelessness and danger and then rescue the subjects from this condition so that the persecutor is perceived as being a friend, protector and savior [classic Stockholm syndrome].
...continue reading this topic >>
All Eyes On Trump
I'm watching CPAC on C-SPAN and President Trump just stepped onto the stage.

He looks better now than he did four years ago.
...continue reading this topic >>
Why would they double down on losing
In one term Donald Trump was impeached twice and lost the house the senate and the presidency for the republicans his approval rating when he left office was at 28%, the lowest in history. Why on earth would republicans keep him as the leader of the party?
...continue reading this topic >>
GAGA's Mutts Ain't Newsworthy
While the world is on the fast track straight to hell, the lame stream media is worried about two mutts belonging to that weird heifer that calls herself GAGA.

Walter Cronkite is perpetually rolling over in his grave.

Nothing on the news is news anymore.

It's all fluff, bullshit and pure propaganda.

And you liberal douche packets are lapping it up like GAGA's mutts.
...continue reading this topic >>
If this virus is so... 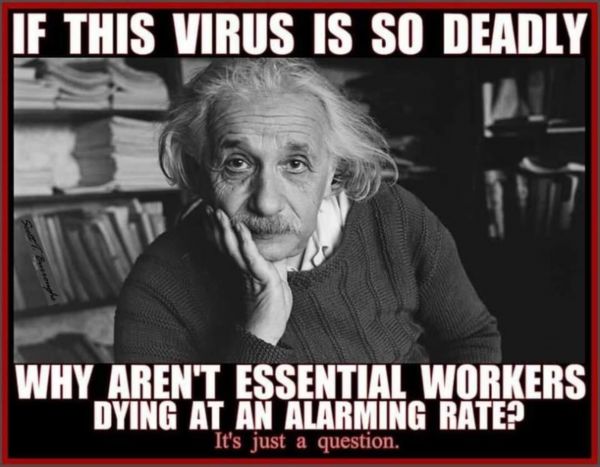 ...continue reading this topic >>
Posts in the Sand
Why must we infer other's belief system from a sampling of their posts?

Over the last years, I have posted under the name manning, manning4 and manning5 a number of papers that define my beliefs, state my positions on the world of events, and generally commented on OPP from a Conservative viewpoint. In perspective, I might as well have written them in the sand, only for them to be washed away when the tide comes in.

To name a few of these posts I believe to be of some importance to me here is a listing of their titles:
A World Outline
Major Issues
Belief System
A Christian Worldview
A Brief Comparison Between Conservatism and the Left
A Worldview in 84 Phrases
Key Conservative Actions
Belief System Matrix
Really Simple Conservatism
And many more!

I believe these posts and others represent my views fairly completely, no matter that they have been washed away with time.
My point here is that I do not see at OPP very many similar, in-depth revelations of belief from others, with a few really outstanding exceptions, mainly from the Rightists.
.
Thus for reading many posters here what they stand for in life is not altogether clear, with the obvious exception of Trump hatred, which is the principal stuff of left wingers, and the various atheistic posters that seem to believe in nothing, and want us to go along with them down the tube.

There should be a common file here on OPP where each serious poster actually sets forth his own belief system for all to read at any time, all in a systematic fashion. Perhaps even a form that asks the key questions would be helpful to all of us.
...continue reading this topic >>
This does NOT make sense just like present occupant of the White House . ...
The other day Jen Psaki said the difference between President Trump immigration policy and illegitimate biden's is that biden does not separate unaccompanied children at the Border from their parents . ....My question is if they're unaccompanied how are they getting separated from their parents?? ) UNACCOMPANIED means UNACCOMPANIED !!!!😂

Some Thoughts for the Day:

> Not one politician has died from the virus, lost their job, had their business or home looted, missed a haircut, worried about where their next paycheck was coming from, or wears a mask (unless on camera.) I don’t know, but it sure feels like we are being played. Whaddya think?

> Remember how we panicked when we couldn’t find any toilet paper? What are we going to do when we can’t find a cop? Or a fireman. Or a First Responder.

> NYC defunded the very people that ran into the burning towers on 9/11. How do you feel about that? Think about it because as sure as night follows day we will get hit again as we did on 9-11, and who will run into those burning buildings to save those who cannot save themselves? Did you ever think one of them could be you?

> If we all started wearing masks with “Trump 2024” on them, how long do you think it will take before democrats led by Hollywood darling Dr. Anthony Fauci decided we don’t need them anymore?

> Pretty wild how we used to eat cake at birthday parties after someone had blown on it. Those were good times weren’t they?

> I don’t want to know “Why mobs are tearing down America’s monuments.” I would rather know, “Why are we letting them?”

> Watching our country being destroyed by our own people is the worst thing I’ve ever seen in my lifetime. It fills me with a sadness I have difficulty expressing in words.

> Nothing says “unity” like playing a separate National Anthem for black people and white people at NFL games. Or watching athletes kneel during the playing of our National Anthem. In my humble opinion, this is not only disrespectful; it is downright wrong.

> If you still think that the recently concluded National Election is about Democrats vs Republicans, it was not. Rather, it was a huge battle of good versus evil; of right versus wrong. And it still rages on. I, for one, am sick and tired of Democrats trying to denigrate President Trump and all that he had accomplished for our nation. Instead, what President Biden and the gaggle of liberal/socialist democrats are fixated on is to decry all things Trump as if he was some kind of evil force. How can a man who donates his entire salary as President, who lifted the wages of black America; who rebuilt our military and reduced unemployment to levels never before seen in our history, and who put “America First” in all his actions be evil. Maybe we should be asking and demanding how democrats intend to do things that will improve our nation. Haven’t heard much of that from them; indeed, exactly the opposite with the 52 executive orders and actions were taken by President Biden.

> The battle my friends is Progressive Socialism vs The Republic of the United States of America. You are either for a big government that has no regard for the ability of citizens to think, act, innovate, create and govern themselves or you are for what our Founders so staunchly believed and conceived when they gave us a Republic…that Americans are entirely capable of managing their affairs based on principles of freedom.

> If black lives really mattered; they’d be tearing down crack houses instead of statues. I know of no American living today who owned slaves. Throwing money at the problems of Black America hasn’t worked over the last fifty years when we spent over $5.0 trillion for and on behalf of Black Americans.

> Time for real Americans to take a stand. I refuse to support the NFL, NBA, MLB, or any organization that removes the National Anthem and refuses to show respect for our Country and our Flag. Far too many of my friends gave their lives, and many more endured debilitating and catastrophic injuries so that I could live in freedom. What Baseball, Basketball, and Football players need to understand, and that is their coach’s responsibility, is that they are entertainers, nothing more. I may watch them be entertained, not to hear their opinions on politics, race relations, or economics.

> If masks work why didn’t we just give masks to prisoners instead of releasing them into communities so they can commit more crime?

> Oprah Winfrey’s special begins with, “What you WHITE people need to understand…” Now, reverse the COLOR. Does this sound racist to you? That’s because IT IS!

> Think about these facts: Blacks account for 13% of our population and, depending on which study you consult, Blacks commit 57% of all crimes. But America is made up of Indians, Asians, Hispanics, Italians, Irish, Polish, French, Dutch, English Chinese, Japanese, and many other ethnic origins. You know….. E Pluribus Unum…“Out of Many, One” How is it that the ones making all the noise and using the race card are always Blacks?

The United States officially became a Republic in 1776, 245 years ago.

The number of people now getting Free Stuff outnumbers the people paying for the Free Stuff. So, where are we headed?

Failure to change spells the end of the United States as we know it. (I Must Have Been In a "Gin-Mill" When We Collectively Lost Our Balls & Brains!!!)
...continue reading this topic >>
I am a radical moderate
"I am a moderate – a radical moderate. I believe profoundly in the ultimate value of human dignity and equality. I therefore believe as well in such essential contributions to these ends as fairness, tolerance, and mutual respect. In seeking to be fair, tolerant, and respectful I need to call upon all the empathy, understanding, rationality, skepticism, balance, and objectivity I can muster.” ― Elliot Richardson, Reflections of a Radical Moderate

Elliot Richardson...Former United States Secretary of Health and Human Services. Elliot Lee Richardson was an American lawyer and public servant who was a member of the cabinet of Presidents Richard Nixon and Gerald Ford. As U.S. Attorney General, he was a prominent figure in the Watergate Scandal, and resigned rather than obey President Nixon's order to fire special prosecutor Archibald Cox.
...continue reading this topic >>
For more, check out Active Topics page.
Forum Sections
Main