Police are announcing the arrest of a “person of interest” in the case of four men who went cycling and didn’t return. Their dismembered remains were retrieved from an Oklahoma river and the cause of death determined as gunshots. It appears the men were not as innocent as they seemed. On top of that, a man who owns property involved in the investigation was arrested Tuesday in Florida “on an unrelated charge of grand theft of a motor vehicle.” At least there, they are smart enough to hold him without bail while they check out his connection to the murders.

Arrest in dismemberment case
Clues are slowly providing fresh leads in the gruesome case of shooting death and dismemberment.

After the mutilated bodies of Mark Chastain, 32; Billy Chastain, 30; Mike Sparks, 32; and Alex Stevens, 29 were recovered from a river outside Okmulgee, Oklahoma, investigators have been trailing down all the leads they come up with.

Police Chief Joe Prentice notes that “whenever water is involved, it makes it much more difficult to identify evidence.” The missing persons case was opened by relatives after leaving home on bicycle in the evening of October 9.

A passerby spotted something suspicious poking out of the river which led to discovery of the remains. All the chief can say for certain is that whatever happened to the men was a “very violent event.” by Monday, it was changed to a murder investigation and they hit a solid lead, almost by accident, on Tuesday, October 18.

Florida police arrested 67-year-old Joe Kennedy and he’s been named as “a person of interest.” There aren’t any details other than he was charged with stealing a car and they aren’t letting him out on bail.

He’s also being held in connection with another shooting case. Reports confirm “a warrant issued for his arrest in Okmulgee County District Court in relation to a shooting in 2012.”

Not yet a suspect
Kennedy, police insist, “has not been named a suspect in the killings.” They certainly think he knows something about the case though. Police “want to speak him to again but have not specified why.” Meanwhile, the story gets interesting back in Oklahoma. First, a witness came forward to tell police he would have been with them if he hadn’t chickened out.

Information was “supplied by a witness who reports they were invited to go with the men to quote, unquote, ‘Hit a lick big enough for all of them,’ the chief said Monday in a news conference.” He isn’t saying “what they were planning or where they planned to do it.” The witness might not have had all the details.

“Although the official cause and manner of death is still pending, each victim suffered gunshot wounds,” Prentice informs. “All four bodies were dismembered before being placed in the river.”

That makes everything about this case a lot more difficult. The “department requested additional video surveillance from businesses in the area and continues to follow up on tips about different sightings.”

Police later found “evidence of a violent event” on “a property adjoining one of those locations.” The chief admits that “the person of interest owns the salvage yards the phones were tracked to.” Kennedy denies everything but stole a car and ended up in Daytona Beach Shores, Florida. Stay tuned for updates. 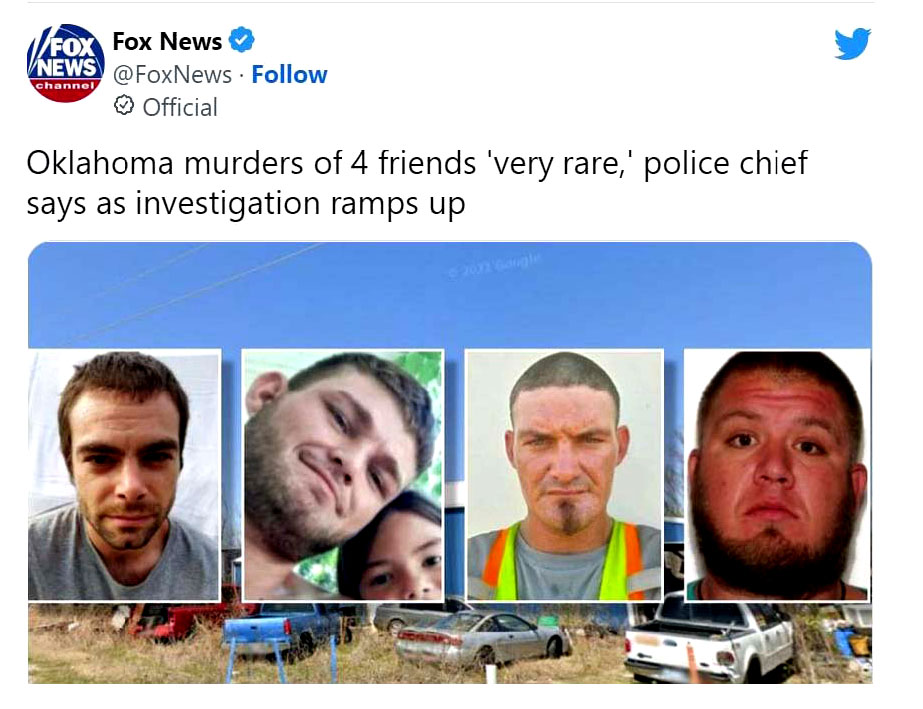