The Misery Index Is at Recession Levels

In spite of the fact that real wages are going down, the cost of living is soaring, and new jobless claims are heading up at a rapid pace, and the savings rate has collapsed, what really matters to the White House, it seems, is the "technical definition" of recession.

Never mind the fact that the US economy has contracted for the past two quarters, according to the federal government's own numbers. Apparently, as long as the NBER has not yet issued its opinion on whether or not the US economy is in recession, the White House is going to double down on the assertion that the economy is in fine shape and people should really stop complaining. After all, as one White House spokesman put it, it's not like there's a famine or anything. So quiet down, rubes.

Although the White House seems to believe that things are pretty OK, the US's misery index suggests they're not.

June's misery index (a composite of unemployment and CPI inflation) has risen to 12.5. That's the highest since September 2011 when the US economy was experiencing a time of very weak job growth and economic growth following the Great Recession. At the time, the yield curve almost inverted, and there were fears of a new recession.

mis
So while the NBER may not have yet opined on whether to apply the word "recession" to the current economy, the economy is clearly not in good shape. Call it a recession, or don't.

con sent
Consumer sentiment has plummeted alongside the increasing misery index, and this has often been the case in recent decades. Of course, economists and White House spokesmen could always just come back and claim that consumer sentiment is "wrong" and that people don't understand how good things are. It's worth noting that politicians, central bankers, and economists have done exactly that during months preceding previous recession. Ben Bernanke, for example, repeatedly noted in 2008 that the Federal Reserve was not predicting recession at all—this was after the recession had already begun (according to the NBER.) Of course, as Bernanke was insisting "all is well," both consumer sentiment and the misery index were trending in recessionary directions.

Now we may be in a similar situation with Fed chair Jerome Powell talking up the economy's alleged strengths while consumer sentiment goes into a nosedive, and the misery index repeatedly rises.

Yet, the bad news continues to pile up. The Fed has long clung to the job openings data in the JOLTS report, claiming that the economy must be find because employment (a lagging indicator) suggests strength. Well, this morning's JOLTS report shows a clear downward turn from its upward thrust with job openings falling month-over-month by the most since the 2020 recession. Job openings have fallen 9.8 percent from the March peak.

But hey, at least there's no famine! 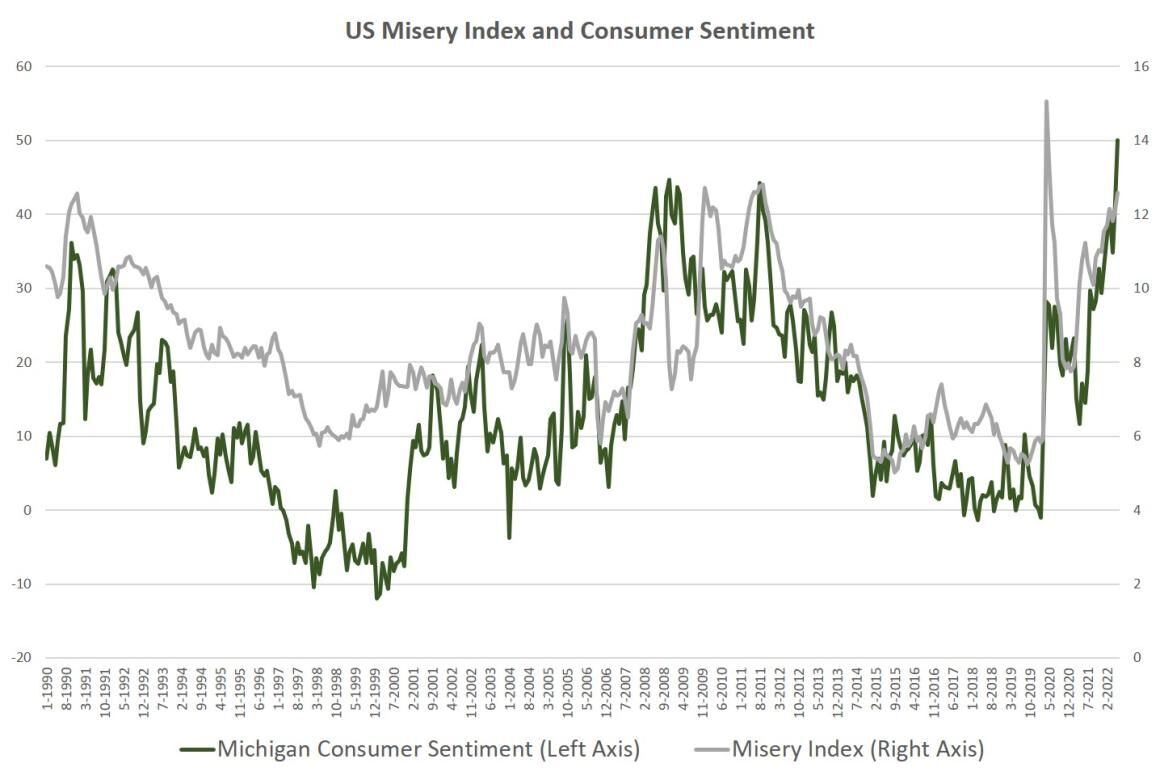