Desertions have exploded within the United States Navy since President Joe Biden’s inauguration.

More than twice as many sailors deserted their Navy posts in 2021 than in 2019, according to Task and Purpose.

A poor quality of life for enlisted sailors has fueled the Navy’s desertion crisis.

Sailors stationed at Walter Reed National Military Medical Center revealed they were billeted without hot water and air conditioning for months to the Navy Times earlier this year.

Five sailors stationed aboard an aircraft carrier under constant construction committed suicide in a time span of ten months, according to Military.com.

Living had become mentally arduous on board the ship due to constant noise and the havoc of endless construction.

Master Chief Petty Officer of the Navy Russell Smith had dismissed sailors’ concerns in a visit to the George Washington, insisting that they persevere in a living situation that had already driven members of the crew to suicide.

Three Navy commanders were relieved of command in one week in June alone.

Those fired included the captain responsible for the Navy’s only basic training installation.

The Navy said “lost confidence” caused the firings, falling back on a term often used to justify the firings of military officers without revealing a specific reason.

Senior Navy leaders testified to Congress on quality of life issues within the branch earlier this year, with lawmakers questioning the treatment and living standards afforded to junior enlisted sailors.

As the effects of a mental health crisis and desertion spree plague the Navy, the Biden administration has doubled down on new programs to promote critical race theory and gender ideology within the branch.

A Navy video on using the correct progressive gender pronouns was distributed within the branch in June.

The men and women who signed up for America’s Navy deserve better than this.

They require leadership closely attuned to solving the serious problems wreaking havoc on the Navy.

Not social experimentalists using their power to create a progressive playground.

Biden and all of his **ckups are destroying my US Navy.
Did I use the correct pronoun in the line above??? 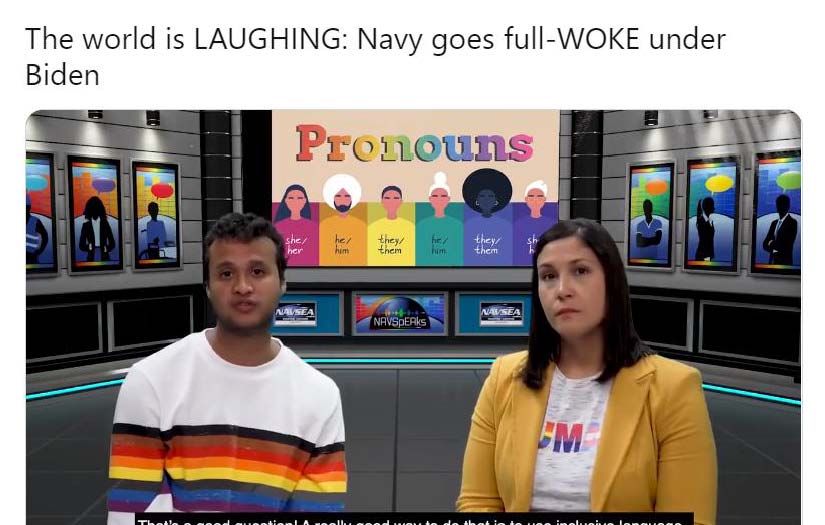 But you are right. Take your woke bullshit and pronouns and faggotry and stuff them all. The Navy personal are there to support the Navy's Admirals as part of the weapons at their disposal. They are clogs in a machine. They are not for unProgressive experimentation and radical theorys.