Zemirah Loc: Sojourner En Route...
Pesach/Passover: Why is this night different since Yeshua/Jesus observed it?

"In the future, when your children will ask you, ‘What does all this mean?’ Then you will tell them, ‘With the power of His mighty hand, the LORD brought us out..." - Exodus 13:14

The number four plays a significant role in Judaism. There are the four species of vegetables for Sukkot; four kingdoms in the book of Daniel; four Torah portions in the tefillin; four Matriarchs. At Passover, we find this number in abundance. In the course of the Passover Seder meal we have four sons, four cups of wine, four expressions of redemption (Exodus 6:6-7) and perhaps the most famous "four" of all: the Four Questions.

As the Seder developed over the centuries, the Four Questions underwent many changes and were altered as different situations arose.1
For example, originally one question dealt with why we ate roasted meat.2
After the destruction of the Temple, that question was deleted and one about reclining was substituted.

Today, the Four Questions (phrased as observations) are asked by the youngest child in the family:

Why is this night different from all other nights?

On all other nights, we may eat either chometz (leavening from wheat, rye, oats, barley or spelt in the product) or matzoh; on this night, only matzoh/unleavened bread (hurriedly made - for centuries the staple diet of the toiling slaves in Egypt).

On all other nights, we eat all kinds of vegetables; on this night, we must eat maror. (Maror refers to the bitter herbs eaten at the Passover Seder in keeping with the biblical commandment "with bitter herbs they shall eat it.")

On all other nights, we do not dip even once; on this night we dip twice.
Why do we dip twice during the seder? We commemorate two biblical dipping that bookend the Exodus narrative. First, we dip the karpas into salt water to remember Yosef’s brothers dipping their coat of many colors in blood after their transphobic attack that led to the first Israelite being sold into slavery in Mitzrayim.
The second dipping commemorates the Israelites dipping bunches of hyssop into the blood of the first Pesach offering, then painting their doorposts with the blood so Hashem would pass over their houses that night.
The first dipping set into motion the Israelites’ descent into slavery, but the second dipping on the first Pesach, the first night of B’ney Yisra’el’s liberation, set into motion their redemption.

On all other nights, we may eat either sitting or reclining; on this night, we all recline... it serves as an additional means of publicizing the great miracle of our redemption from slavery to freedom that we celebrate at the Seder.

The Father or Grandfather of the family gathering then explains the Passover story.

In the spirit of rabbinical adaptation, here are additional questions that both children and adults must ponder.

Why do we place three striped and pierced matzos together in one white napkin?

The "drama" of the afikomen is a "picture" that is only seen in what the Messiah, Yeshua/Jesus, did. When was Isaac or the Kohanim broken, hidden away, and then brought back? Never. - But Yeshua/Jesus was killed, "cut off", for the sins of the world, buried (hidden away), and then raised from the grave, "brought back", as the annually enacted afikomen "drama" depicts.

Among traditional Jewish gatherings, there are any number of traditions about this.

One tradition holds that they represent the three classes of people in ancient Israel: the Priests, the Levites, and the Israelites.
Another tradition teaches that they symbolize the three patriarchs, Abraham, Isaac and Jacob.
Yet another explanation is that it is a depiction of the "Three Crowns": the crown of learning, the crown of priesthood, and the crown of kingship.3
And a fourth option is that two of the matzos stand for the two weekly loaves of Exodus 16:22, and the third matzoh represents the special Passover bread called the "bread of affliction."4

And if those are not enough to keep one's imagination running, here's another.

Rabbi Abraham Isaac Sperling suggested that the three matzos stand for the three "measures of the fine meal" which Sarah prepared for Abraham's angelic guests (Genesis 18).
The reason for this interpretation lies in the rabbinic tradition that this event occurred on the night of Passover!5 Out of all these explanations, how can we decide which is the right one, or is there yet another?

Why is the middle matzoh, the afikoman, broken in the course of the Seder?

Are we breaking the Levites, or Isaac, or the crown of learning, or one of the guests' cakes, or the bread of affliction? Or are we symbolizing the parting of the Red Sea (another explanation)?6

If any of these explanations are correct, why is the matzoh hidden away, buried under a cushion, and then taken out and eaten by all, as the Sephardic ritual puts it, "in memory of the Passover lamb?"

Where is our pesach, our Passover sacrifice, today?

The Torah prescribes that a lamb is to be sacrificed and eaten every Passover as a memorial of the first Passover lambs which were killed (Deuteronomy 16:1 -8).
In reply, it is said that without a Temple we can have no sacrifices - yet some have advocated that the sacrifice still be made in Jerusalem even without a Temple.7

Since the Passover sacrifice, like others, involved the forgiveness of sins, it is important that we do the right thing. Some feel that the pesach had nothing to do with forgiveness. But in Exodus Rabbah 15:12 we read, "I will have pity on you, through the blood of the Passover and the blood of circumcision, and I will forgive you."

Again, Numbers Rabbah 13:20 cites Numbers 7:46, which deals with the sin offering, and then adds, "This was in allusion to the Paschal sacrifice." Clearly the rabbis of this time period regarded the pesach as effecting atonement, and Leviticus 17:11 confirms that "it is the blood that makes atonement for the soul."8

Today, however, we have only a shankbone, the zeroah, as a reminder of the Passover sacrifice, and roasted egg, the chaggigah, in memory of the festival offerings. But nowhere did God say that we could dispense with sacrifice. So, where is our pesach today?

The answers to these questions can be found by examining how and why the Seder observance changed dramatically in the first century.

The Seder celebrated by Jesus and his disciples

The "Last Supper" was a Passover meal and seems to have followed much the same order as we find in the Mishnah.

In particular, the matzoh and the Third Cup are given special significance by Jesus:

And he took bread, gave thanks and broke it, and gave it to them, saying, "This is my body given for you; do this in remembrance of me."
In the same way, after the supper he took the cup, saying, "This cup is the new covenant in my blood, which is poured out for you"
-Luke 22:19-20

The early Jewish believers in Jesus considered him the fulfillment of the Passover lambs that were yearly sacrificed. Thus Paul, a Jewish Christian who had studied under Rabbi Gamaliel, wrote, "Messiah, our pesach, has been sacrificed for us" (1 Corinthians 5:7).
John in his gospel noted that Jesus died at the same time that the Passover lambs were being slaughtered in the Temple (see John 19:14) and that like the Passover lambs, none of his bones were broken (the two thieves being crucified had their leg bones broken by the Romans - John 19:32, 33, 36).

The idea behind all this was that just as the Israelites were redeemed from Egyptian slavery by an unblemished lamb, now men could be freed from slavery to sin by the Messiah, the Lamb of God.

The Cessation of the Temple sacrifices

The first Christians were considered a part of the Jewish community until the end of the first century when they were expelled by the synagogue. Until the temple was destroyed, these Messianic Jews worshipped regularly with those Jews who didn't believe in the Messiah. In fact, there were entire congregations that worshipped Yeshua and they continued in their observance of the regular Jewish festivals.

In such a setting, much interchange of ideas was made possible.

Jesus declared over the matzoh, "This is my body." Since the Jewish believers of that time saw Jesus as the Passover lamb, it followed that they would see the matzoh as symbolic of Jesus, the Passover lamb. In turn, with the destruction of the Temple and the cessation of sacrifices, the larger Jewish community might well have adopted the idea that the matzoh commemorated the lamb, even if they discounted the messianic symbolism.

As mentioned earlier, the significance of the middle matzoh and the ceremony connected with it is shrouded in mystery. The derivation of the word afikoman itself sheds some light.
The word is usually traced to the Greek epikomion ("dessert") or epikomion ("revelry")9. But Dr. David Daube, professor of civil law at Oxford University, derives it from aphikomenos, "the one who has arrived."10

This mystery clears further when one considers the striking parallels between what is done to the middle matzoh (afikoman) and what happened to Jesus.

The afikoman is broken, wrapped in linen cloth, hidden and later brought back. Similarly, after His death, Jesus was wrapped in linen, buried, and resurrected three days later. Is it possible that the current Ashkenazic practice of having children steal the afikoman is a rabbinical refutation of the resurrection, implying that grave-snatchers emptied the tomb?

These factors strongly suggest that the afikoman ceremony observed within the Pesach/Passover of worldwide Judaism today was adopted from the Jewish Christians of the 1st century by the larger Jewish community, which also adopted the use of the three matzos.

Messianic Jewish Christians contend that these three matzos represent the Tri-une nature of God, and that the afikoman which is broken, buried and dramatically brought back can only represent Yeshua/Jesus the Messiah.

The question then remains: What will it take to convince you?

10. Daube, "He That Cometh", (London Diocesan Council for Christian-Jewish Understanding, no date).

Adaptation from Rich Robinson |November 01 1983; Senior Researcher with Jews for Jesus in San Francisco. He grew up in Brooklyn, New York, in a Reform Jewish family, and came to faith in Yeshua at Syracuse University in 1973.

Rich received his M.Div. from Trinity Evangelical Divinity School in 1978 and the Ph.D. in Biblical Studies and Hermeneutics from Westminster Theological Seminary in 1993. In the late 70s and early 80s he played piano for the Messianic (Jews for Jesus) music group, "The Liberated Wailing Wall." He has served as a missionary at several of Jews for Jesus’ U.S. branches and has been involved with Jewish mission projects in Ukraine and Israel. Rich began the Jews for Jesus web site in 1995 and has been part of the team training Jews for Jesus missionaries. He has taught at Fuller Theological Seminary and Western Seminary.

The Passover Seder plate is a traditional centerpiece, comprised of six compartments:
maror (bitter herbs) grated white horseradish, symbolizing the bitter lot of the enslaved Israelites;
karpas (vegetable), dipped in saltwater;
charoset, chopped apples, walnuts and cinnamon moistened with wine and formed into a paste;
zeroa (a meat bone), symbolic of the mighty arm of God;
baytza, hard-boiled egg symbolic of the festival sacrifice brought in temple times, and
chazeret, a vegetable. 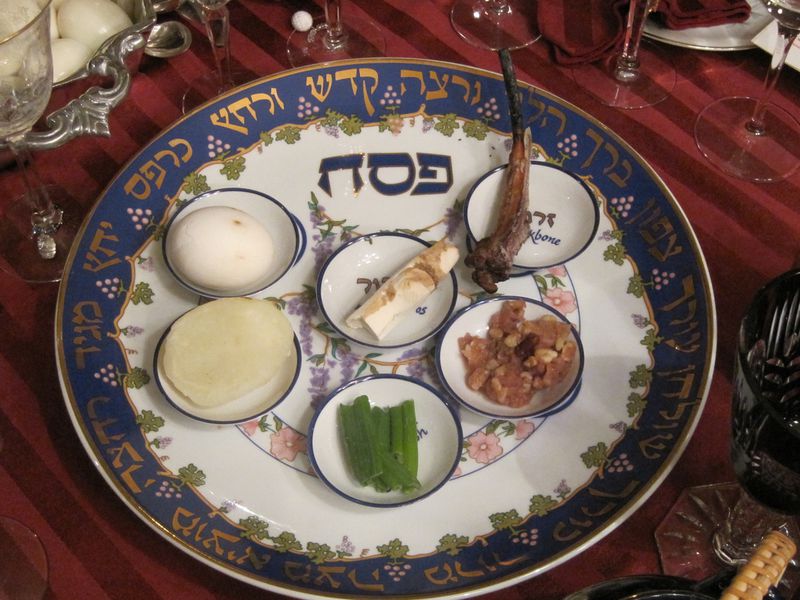