What we have is too many people moving in too fast. They come on faster than infrastructure can keep up. The areas where most of the outages occurred were fields back then. Now they are suburban sprawl.

Salty would believe that the high winds blowing across Texas were brought on by too many people sneezing but if they only had gotten the Gates/Fauxci depopulation vaccine the sneezing would have been reduced by at least 50%. (50% of the people would be dead by now).

The only people suffering are the idiots who have immigrated to Texas to escape from their own shit hole states.

They came here ill-educated and ignorant of basic preparation protocols.

'Real' Texans are self sufficient and we are well prepared for weather related disasters.

So we just hunker down and watch as the ne'er do wells scramble in desperation.

Wait until they have thousands of south of the border types moving in which will only exacerbate the problem.

amadjuster Loc: Texas Panhandle
fullspinzoo wrote:
Wait until they have thousands of south of the border types moving in which will only exacerbate the problem.

Helping to provide methane heat and blowing a kiss to Kemmer at the same time!

Sonny Magoo Loc: If you ain't Dutch you ain't much.
saltwind 78 wrote:
son, We didn't get into this mess overnight, and it will take time to reverse the problem. We Americans have a problem with immediate gratification. It has to be fixed now. That might work if you are replacing a crumby QB on an NFL team on draft day, but reversing a century and a half of pouring poison onto the air, not so much,

We pour poison into the environment.
TRUE.
Carbon dioxide is a poison.
FALSE.
Just wanted to clear the air Salty.

It was a bad weather storm back then.....but today....its some bullshit that you've bought into?

Tell me salty, what caused the end of the last ice age? Why did the glaciers covering most of the North American continent melt, and recede?

Was it because of Billy Bob out there racing his 2 cycle go cart?
Was it Mastadon farts?

I think we need to look into the Mastodon farts problem.. could the reason why...LOL

Right, congress is overloaded with them.

Concentrations of more than 10% can lead to convulsions. Over 30% leads to unconsciousness in seconds. Not a poison, essential for proper respiration in low doses but not conducive for long life in high doses, >30%.

permafrost Loc: Minnesota
son of witless wrote:
I say that cutting Green house emissions is a fools errand. My logic is infallible. In fact I have many packets of infallible logic that you and all of the liberals who think as you do cannot refute, but lets us start with this.

Over the last 30-40 years or so the weather, uh no the CLIMATE has been whatever it has been. You still with me ? In that time we've had all kinds of droughts, floods, hot spells, cold spells, etc. Whenever we've gone through a super event such as the Hurricane that flattened New Orleans in 2005, you guys blame Global Warming. You then predict that super Hurricanes are now the normal pattern because the earth is too warm. Only Green energy can save the Planet.

The problem is, it wasn't a pattern. The next few years were not all that bad, but who cares. You guys have set the story. Stupid people buy it so it's all good. Obama, then later Biden were elected. It's all good.

During the 4 years of Trump and his blatant CO2 emitting economy, the Earth didn't end. This little cold spell that walloped Texas is not that unusual in the scheme of things.

So where do we go from here ? Or you guys cannot prove one way or another that your big CO2 reductions will do anything. In the next 50 years, the " Climate " will do whatever it does. If it is benign you guys will take the credit. If it is horrible, then you will say that it would have been worse if not for your remediation measures.

We do not have an extra test Earth as a control World to test whether the crap you guys are doing is doing anything good or bad at all. When they tested the Corona Vaccines they always have a control group to see what the difference was.

Now I double dog dare you to refute my irrefutable analysis.

I say that cutting Green house emissions is a fool... (show quote)

Son, It so pains me to repeat over and over the facts of a GLOBAL event..

Now what you said about hurricanes is correct, but you did not bother to think about the other side of the globe..
While hurricanes were no big thing for most of those several years for north America, the Pacific Typhoons set records.. several times. at least one even affected Alaska.

The erratic weather is a result of climate change.. the imbalance in temperature from the extra heat, changes the air flow patterns over the globe.. that in turn changes the pattern and duration of weather in every part of our world..

The overall problem is that the very rapid change in the balance or the worlds CO2 and other greenhouse gases has been so rapid that the earth, more importantly mankind has not been able to adapt..
Intensified by this hefty individual... 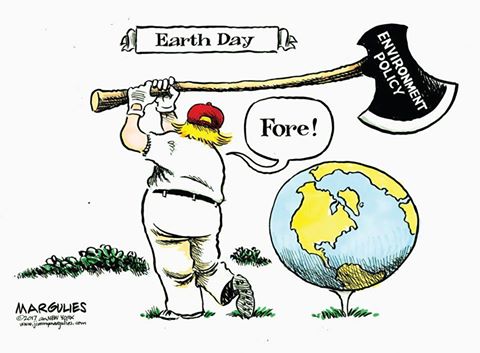 | Reply
Feb 19, 2021 14:23:56   #
RascalRiley
Tiptop789 wrote:
Concentrations of more than 10% can lead to convulsions. Over 30% leads to unconsciousness in seconds. Not a poison, essential for proper respiration in low doses but not conducive for long life in high doses, >30%.

And the greedy do not care.

permafrost Loc: Minnesota
Leave it to Archie to pose a question that brings up my curiosity. so have a look ...


Gee, a lot of articles on what ended the ice age.. conservatives will like this one, it says , not ended yet.. Aimed at high schoolers,, it is short.. follow the link...

To find out more about Earth's climate in the past, scientists study ice cores. These samples tell us that during the current ice age, climate on Earth has flip-flopped between glacial and interglacial periods at least 17 times!

Ice core
Ice cores are cylinders of ice drilled through the thick sheets of Greenland and Antarctica.

So it is very likely that Earth will turn cold again, possibly within the next several thousand years. But, we have to keep in mind that human activities today are impacting climate on a global scale. So when we predict future climate changes, including the next glacial period, we need to consider the changes that humans are causing.

This one is longer and explains more... the bottom line to me,,,, seems they do not know for sure.. lots of ideas to choose from..

The Earth’s climate has been quite stable over the past 11,000 years, playing an important role in the development of human civilisation.

Prior to that, the Earth experienced an ice age lasting for tens of thousands of years. The past million years of the Earth’s history has been characterised by a series of ice ages broken up by relatively short periods of warmer temperatures.

These ice ages are triggered and ended by slow changes in the Earth’s orbit. But changing atmospheric concentrations of CO2 also plays a key role in driving both cooling during the onset of ice ages and warming at their end.

The global average temperature was around 4C cooler during the last ice age than it is today. There is a real risk that, if emissions continue to rise, the world warms more this century than it did between the middle of the last ice age 20,000 years ago and today.

In this explainer, Carbon Brief explores how the last ice age provides strong evidence of the role CO2 plays as a “control knob” for the Earth’s climate. It also acts as a cautionary tale of how the climate can experience large changes from relatively small outside “forcings”.

I love it. He might get all excited. Be careful. BTW, saw some pictures from down there. Stay warm.

amadjuster Loc: Texas Panhandle
fullspinzoo wrote:
I love it. He might get all excited. Be careful. BTW, saw some pictures from down there. Stay warm.

You realize that we all need to drive a Prius to solve this.

Rather drive a Yugo.

KKKemmer likes to put his nose into everything. I'm sure he will test his olfactory senses on that kiss.

| Reply
Feb 19, 2021 17:20:35   #
drlarrygino
Tiptop789 wrote:
Concentrations of more than 10% can lead to convulsions. Over 30% leads to unconsciousness in seconds. Not a poison, essential for proper respiration in low doses but not conducive for long life in high doses, >30%.

Drinking too much water can kill you too.