permafrost Loc: Minnesota
RandyBrian wrote:
Are you serious???? Frosty, with all sincerity, you need to see someone. One or two of your statements might be arguable. The rest are just so much utterly ridiculous lies that only a complete moron could believe.

Got any specifics??? Have a good night.. till tomorrow...

permafrost Loc: Minnesota
America 1 wrote:
You asked for achievements, refute them like a man.
Beating the dead horse of impeachment once again.
Correcting the damage for lovers of our country.

try reading again, I made a very short list.. if you want a debate bring something up..

If you only want to echo your orange guy.. fine with me, just stop expecting anyone to bother with a reply.

jim_oldman Loc: Lexington, SC
Comment wrote:
America is outfront of the world because of Trump. Airforce one has a toilet. He opens month and gobbles up all the passengers processed hamburgers.

My list is growing fast just with this this topic

Blade_Runner Loc: DARK SIDE OF THE MOON
Lgal wrote:
YES I DO BECAUSE NONE OF THESE COUNTRIES HAVE EVER, EVER BEEN AT WAR WITH ISRAEL. THEY MAY NOT, REPEAT MAY NOT, HAVE SIGNED ANYTHING BUT THEY WERE NOT AT WAR WITH EACH OTHER "EVER"!
WHEN THE PALESTINIANS SIGN SOMETHING ALONG WITH THE SIRIANS AND LEBANESE THEN AND ONLY THEN WILL YOU HAVE PEACE IN THE MIDDLE EAST.
You don't have a clue, do you?

Just a few examples of Muslim countries who have "never, ever been at war with Israel":

The day after the Israeli Declaration of Independence on 14 May 1948, Egypt, Transjordan, Syria, and expeditionary forces from Iraq entered Palestine. The invading forces immediately attacked Israeli forces and several Jewish settlements. The 10 months of fighting took place mostly on the territory of the British Mandate and in the Sinai Peninsula and southern Lebanon.

As a result of the war, the State of Israel controlled the area that UN General Assembly Resolution 181 had recommended for the proposed Jewish state, as well as almost 60% of the area of Arab state proposed by the 1947 Partition Plan, including the Jaffa, Lydda, and Ramle area, Galilee, some parts of the Negev, a wide strip along the Tel Aviv–Jerusalem road, West Jerusalem, and some territories in the West Bank. Transjordan took control of the remainder of the former British mandate, which it annexed, and the Egyptian military took control of the Gaza Strip.

In May 1967, Egyptian President Gamal Abdel Nasser announced that the Straits of Tiran would be closed to Israeli vessels and then mobilized its forces along its border with Israel and ejected UNEF. On 5 June, Israel launched a series of preemptive airstrikes against Egyptian airfields, asserting imminent attack from the Egyptians.

The Egyptians were caught by surprise, and nearly the entire Egyptian air force was destroyed with few Israeli losses, giving the Israelis air supremacy. Simultaneously, the Israelis launched a ground offensive into the Gaza Strip and the Sinai, which again caught the Egyptians by surprise. After some initial resistance, Nasser ordered the evacuation of the Sinai. Israeli forces rushed westward in pursuit of the Egyptians, inflicted heavy losses, and conquered the Sinai.

Jordan had entered into a defence pact with Egypt a week before the war began; the agreement envisaged that in the event of war Jordan would not take an offensive role but would attempt to tie down Israeli forces to prevent them making territorial gains. About an hour after the Israeli air attack, the Egyptian commander of the Jordanian army was ordered by Cairo to begin attacks on Israel; in the initially confused situation, the Jordanians were told that Egypt had repelled the Israeli air strikes.

Egypt and Jordan agreed to a ceasefire on 8 June, and Syria agreed on 9 June; a ceasefire was signed with Israel on 11 June. In the aftermath of the war, Israel had crippled the Egyptian, Syrian and Jordanian militaries, having killed over 20,000 troops while losing fewer than 1,000 of its own. They call it the "6-Day War".

From 6 to 26 October 1973 by a coalition of Arab states led by Egypt and Syria against Israel as a way of recapturing part of the territories which they lost to the Israelis back in the Six-Day War. The war began with a surprise joint attack by Egypt and Syria on the Jewish holiday of Yom Kippur. Egypt and Syria crossed the cease-fire lines in the Sinai and Golan Heights, respectively. Eventually Arab forces were defeated by Israel and there were no significant territorial changes. The Arab coalition consisted of Egypt, Syria, Jordan, Iraq, Algeria, Morocco, and Saudi Arabia with support from Cuba and North Korea. They call it the "Yom Kippur War"

4430 Loc: Little Egypt ** Southern Illinory
SGM B wrote:
I heard it said, but I have no proof - if his brain was stuffed in a knats butt, it would like like a bb rolling around in a box car - or, if put on the edge of a razor blade, it would look like a bb rolling down a 4 lane highway. Like I said, I have no proof, just what I have heard...hmmm, seems reasonable to me. 😜😜
SGM B out

RT friend Loc: Kangaroo valley NSW Australia
byronglimish wrote:
Did you refuse to take the vaccine because unlike the hand sanitizer you drink, it has no alcohol...? t-nest, 'the gin fueled agitator'

Tell you what, lay off the gin, get a bite to eat and take a little nappy poo.

Please remember to sleep on your side, wouldn't want you to burp up a load of gin and choke on it....only cause I care, bro.

I felt that in the spirit of our budding relationship, this would be funny to both of us.
The Spirit is in the bottle

That's where it starts.

If you only want to echo your orange guy.. fine with me, just stop expecting anyone to bother with a reply.

No need for you to reply, fine with me.
Read enough of your BS posts.

It's good to know that jobs did not talk about civil war like you say right wing did.

I didn't even know that jobs could talk.

bdamage Loc: My Bunker
Airforceone wrote:
It’s a new approach to getting facts into the pea brain of a Trump supporter. Because they just listen to the garbage that comes out of Trumps mouth. Trump supporters live off there stupid immature snap shots that are childish but these snap shots are factual.

Oh look, it's AF1, formerly known as Turdnest trying to make himself relevant for a losing cause. 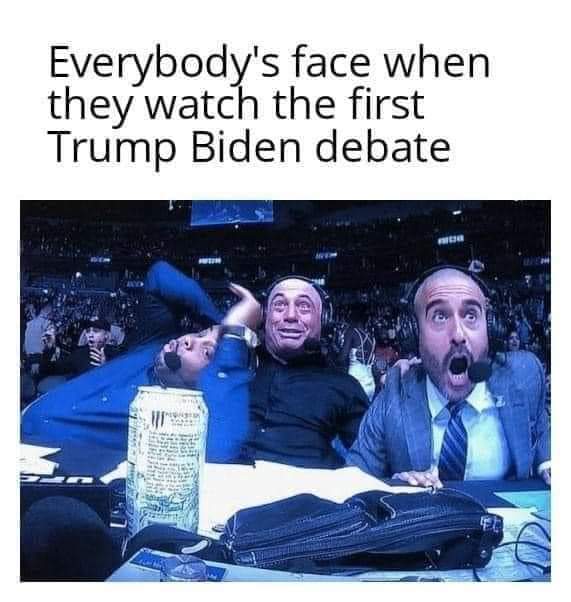 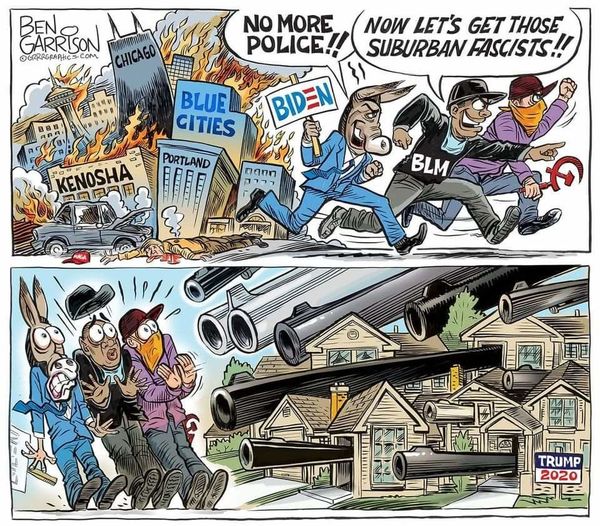 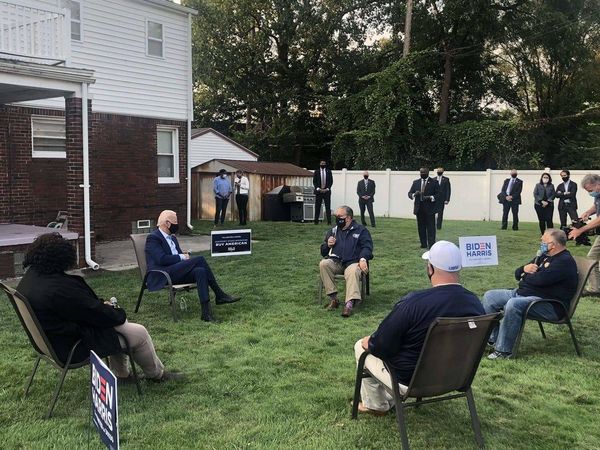 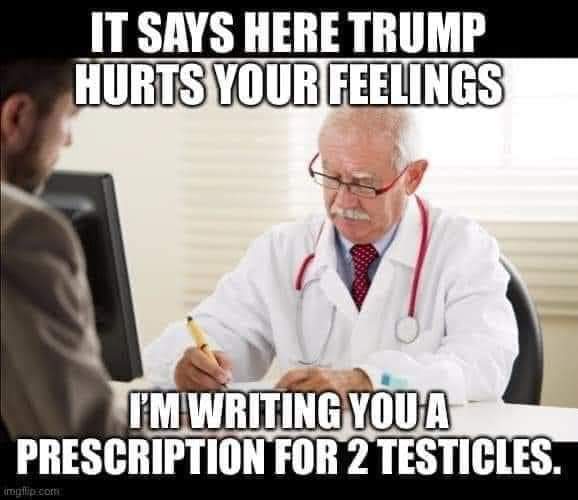 jim_oldman Loc: Lexington, SC
bdamage wrote:
Oh look, it's AF1, formerly known as Turdnest trying to make himself relevant for a losing cause.

If Obamacare doesn't cover that pre-existing condition, then that prescription ain't getting filled. Y'all really think a Democrat will put his hand into his own pocket.

| Reply
Sep 15, 2020 20:33:53   #
Seth
jim_oldman wrote:
If Obamacare doesn't cover that pre-existing condition, then that prescription ain't getting filled. Y'all really think a Democrat will put his hand into his own pocket.

Actually, yes, he or she would, but only to dig out a lighter to light George Soros' cigar or a polishing cloth to buff his shoes for him.

What the hell is wrong with you Trump supporters HRC made these comments it’s on tape. Damm what is it and you answer with cartoons. We have 196,000 dead Americans and he knew how serious this virus was but yet he downplayed it. Wow there is something really wrong with you people 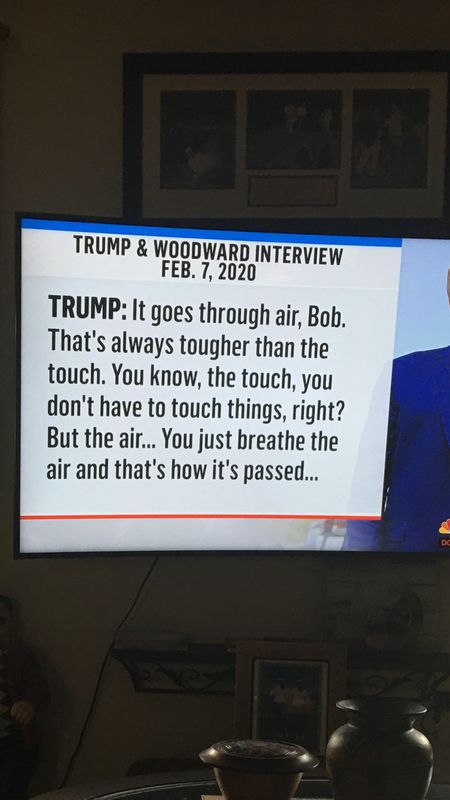 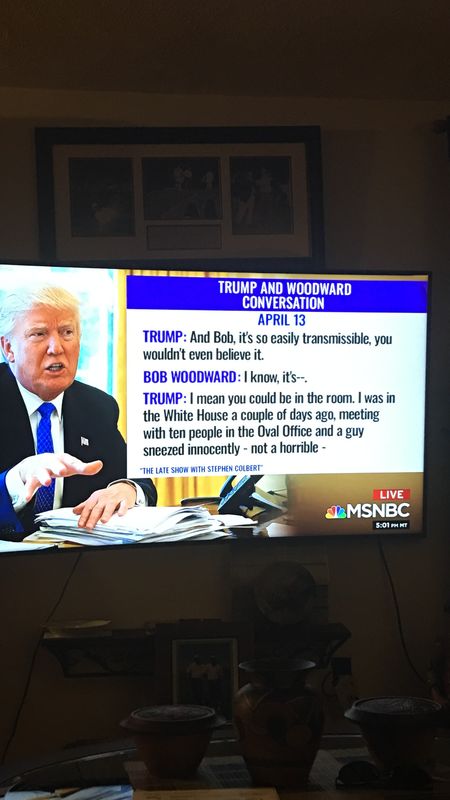 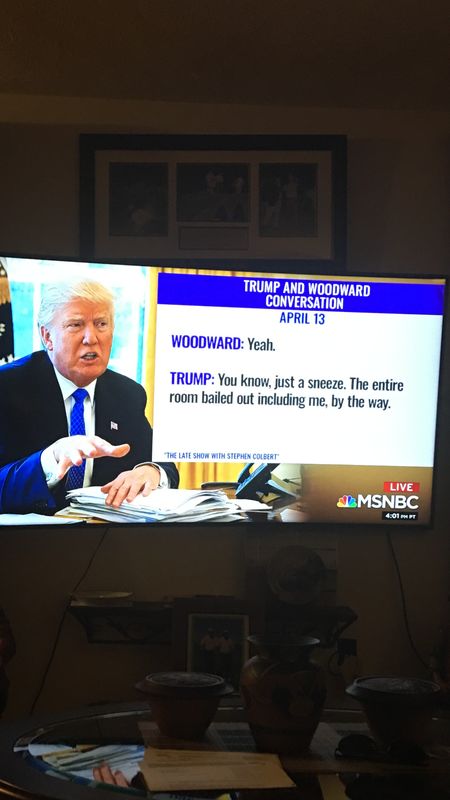 Blade_Runner Loc: DARK SIDE OF THE MOON
Airforceone wrote:
What the hell is wrong with you Trump supporters HRC made these comments it’s on tape. Damm what is it and you answer with cartoons. We have 196,000 dead Americans and he knew how serious this virus was but yet he downplayed it. Wow there is something really wrong with you people
You ask what's wrong with Trump supporters nearly every time you post. OK, here's the answer:

In addition, our dogs are smarter than you.

| Reply
Page: <<prev 1 ... 3 4 5 6 7 8 9 next>>
If you want to reply, then register here. Registration is free and your account is created instantly, so you can post right away.
Main
Home | Latest Digest | Back to Top | All Sections
Contact us | Privacy policy | Terms of use | DMCA
OnePoliticalPlaza.com - Forum
Copyright 2012-2020 IDF International Technologies, Inc.