Flunked out in spelling and English
Of that there is no doubt
Doesn’t know what there, their, or they’re
Are all about

We really should ignore him
And let time take its toll
And let him huff and let him puff
This aggravating troll.
Shameful, you’re drunk already and it ain’t even 1... (show quote)

That is the boy.

bmac32 Loc: West Florida
The joke is on the democratic party, enjoy it!

Airforceone wrote:
You people are children every snap shot is facts your just ignorant people. This is not a joke

Thats putting it as kindly as it can be put!

Fear not.
After all is said & done. Once Trump is out of office the mess he has created will be cleaned up. It will all seem like a bad dream.
Cleaning up Trumps mess will show what Americans are truly made of.

| Reply
Sep 14, 2020 12:06:36   #
byronglimish Loc: Lapine Oregon
Floyd Brown wrote:
Fear not.
After all is said & done. Once Trump is out of office the mess he has created will be cleaned up. It will all seem like a bad dream.
Cleaning up Trumps mess will show what Americans are truly made of.

You blame everything on Trump...smart people know better.

By the way, we already have witnessed your Americans in the Democratic cities burning looting an murdering.

| Reply
Sep 14, 2020 12:15:10   #
dickie
Mark Twain said it best: "Men think they think upon the great political questions, and they do; but they think with their party, not independently; they read its literature, but not that of the other side" — Mark Twain
“Have you ever noticed that practically everything you read justifies and reinforces you own opinions and views on life? The same is true with our radio and television listening and viewing choices as well. We form opinions and then spend out entire lifetimes validating what we believe to be true. This rigidity is sad, because there is so much we can learn from points of view that are different from our own."
From a person who has 50 years of experience and 79 years to get there~

jim_oldman Loc: Lexington, SC
Airforceone wrote:
Only the Right wing racist and evangelicals buy into the Trump lies. They deny everything that comes out of his hamburger eating mouth. So I thought for the idiot right to simply a few things with snap shots. But they won’t get there to stupid.

Donald Trump DID NOT CREATE THE DISASTER JOE BIDEN. You gotta pin that on Pelosi & Schumer. 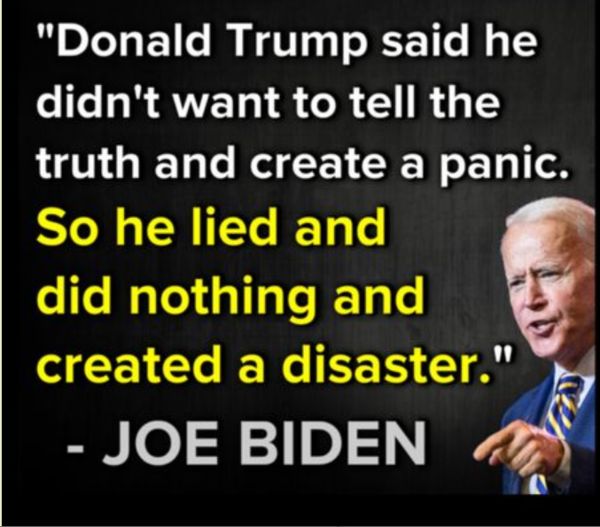 | Reply
Sep 14, 2020 15:34:21   #
On timeon target
Ms_Attitude_Adjuster wrote:
I would waste time to correct all of your spelling errors considering you refer to those that are patriotic and support our duly elected President as being "stupid", but it would be a moot point considering you are not that worried about facts or details anyway. It's genuinely concerning that you call Republicans out but have done ZERO independent research aside from watching far left mainstream media. I won't assume your age, but if you are of the SOFT SOCIAL JUST WARRIOR generation, I can understand why you are confused. I suggest you find remove yourself from the cult you have been associating with and come out into the light where the air is much fresher. You have been coddled your entire life and manipulated by some very mentally disturbed people. Adults do not pretend to be victims and expect to have what the next man has without working for it, they do not parrot false talking points without doing independent fact checking (please see updated CDC report-only 6% of deaths reported were actually due to COVID). I am happy to correct any lie you think DJT told as well; Russian collusion, what? you name it.....just say the word!
I would waste time to correct all of your spelling... (show quote)

Hot damn and well done! I will follow your posts for sure

| Reply
Sep 14, 2020 16:03:19   #
Mantle
jeff smith wrote:
just IF the obumer and the bought and paid for , sleepy dopey China , Ukraine , joe who have disrespected our President , had done their job . then maybe there would of been equipment in storage that would of saved lives .
after the H1N1 virus out break that killed how many ? and 60 millions affected by it . AND there own people have said it was a large FAILURE on obumers part .
sleepy dopey , had this to say about the travel ban on China . it is xenophobic , racist .
and now that brain dead a++ says he was on the leading edge to have a travel ban . how many more lies are you dem followers willing to believe before you see that the bimbos are useless . they are nothing more than a pack of LIARS .
President Trump , is dividing the country ? do you have ANY active cells in your cranium ? it is your bimbocratic socialist/communist farty party that has divided this nation . your party is out to deliver this nation over to the u.n. so that they can come in and deliver us over to the new world order .
is this what you want ? seems like it to me destroy America and give up ALL of our rights , so some jerk in some foreign land can control every thing we do or say . just look no further than the riots in so many metro areas . ALL under bimbocratic control for decades . antifa who ARE the FASCIEST themselves . fighting against fascisms , lying little trolls .
China joe aint out to take away peoples fire arms . do you have any more jokes ? he , dopey joe , has said that the thing out of Tx. was going to be his gun czar . who in the debates said straight out that he will come to TAKE AK 47 , AR15 and any military look alike out of the hands of the people . just another step in disarming the American people . one step at a time . DO YOU KNOW WHY THE 2nd AMENDMENT WAS WRITTEN ?
the republicans are out to take your social security ? well , the bimbos have said this for decades . AINT HAPPENED YET . just a scare tectic they have used to try and gain more senior votes . just another bimbocrat LIE .
ALL OF YOUR POINTS ARE WRONG . JUST LIKE THE BIMBOCRATIC SOCIALIST/ COMMUNIST are LIARS .
how long are you willing to set there and listen to their LIES ? for 4 years they have LIED .
again i ask . where is the Russian collusion ?
where is the fraudulent impeachment ?
ALL thrown in the file of GARBAGE .
ALL fake reports . ALL LIES to deceive their followers into creating division .
do you ever wonder WHY ? the bimbocrats LIE so much . they haven't worked for the working people of America in decades . they sold us out years ago .
i use to be a dem follower . i aint ant more . when i see the bimbos pointing fingers at the conservatives and saying they are doing this or that . well if you follow what has really been going on it is the bimbos who are doing this or that and trying as much as possible to have their followers believe that them repubs . are out to get you . when it is the bimbos who are out to destroy this nation .
just IF the obumer and the bought and paid for , ... (show quote)

So true—and that’s just a fraction of the problems instigated by the dims.

Flunked out in spelling and English
Of that there is no doubt
Doesn’t know what there, their, or they’re
Are all about

We really should ignore him
And let time take its toll
And let him huff and let him puff
This aggravating troll.
Shameful, you’re drunk already and it ain’t even 1... (show quote)

| Reply
Sep 14, 2020 16:40:00   #
Honest Bookie
I am neither a racist nor an evangelical. "Idiot right"? Really? Do not label me and I will not label you. I think for myself. There are some situations wherein I thought President Trump performed badly and I do not always agree with his words or actions. However, as a free thinking individual, I must give President Trump his due for the turnaround in our economy and his efforts in creating a stronger United States. You have the right to think as you wish, as do I. For you to dismiss those who think differently than you as 'racist', 'evangelical', or 'Idiots' is pompous, smug, conceited, and egocentric on your part. That type of mind set does not seem to mess with the "tolerant right".
By the way, wherein you used 'there' it should have been "they're"; 'to' should have been "too".

Dogberry, let me help you choose, don't look for Obama's name on the ballet.

| Reply
Sep 14, 2020 17:18:43   #
Tiptop789 Loc: State of Denial
On timeon target wrote:
Sweetheart your "facts" are as screwed up and off base as your spelling and diction. I just thought it would be pointless to try to explain that to someone that obtuse

If your so worried about spelling, did you bother to look at the post from Jeff Smith?

| Reply
Page: <<prev 1 2 3 4 5 6 7 8 9 10 next>>
If you want to reply, then register here. Registration is free and your account is created instantly, so you can post right away.
Main
Home | Latest Digest | Back to Top | All Sections
Contact us | Privacy policy | Terms of use | DMCA
OnePoliticalPlaza.com - Forum
Copyright 2012-2020 IDF International Technologies, Inc.