Recall what we said earlier today: the proxy Ukraine war just like that in Syria preceding it, "is all about energy."

Recall also the following chart showing Ukraine's shale gas deposits, keeping in mind that the Dnieper-Donets basin which lies in the hotly contested eastern part of the nation and where as everyone knows by now a bloody civil war is raging, is the major oil and gas producing region of Ukraine accounting for approximately 90 per cent of Ukrainian production and according to EIA may have 42 tcf of shale gas resources technically recoverable from 197 tcf of risked shale gas in place.

Finally, recall our story from May that Joe Biden's son, Hunter, just joined the board of the largest Ukraine gas producer Burisma Holdings. From the press release:


R. Hunter Biden will be in charge of the Holdings legal unit and will provide support for the Company among international organizations. On his new appointment, he commented: Burismas track record of innovations and industry leadership in the field of natural gas means that it can be a strong driver of a strong economy in Ukraine. As a new member of the Board, I believe that my assistance in consulting the Company on matters of transparency, corporate governance and responsibility, international expansion and other priorities will contribute to the economy and benefit the people of Ukraine.

R. Hunter Biden is also a well-known public figure. He is chairman of the Board of the World Food Programme U.S.A., together with the worlds largest humanitarian organization, the United Nations World Food Programme. In this capacity he offers assistance to the poor in developing countries, fighting hunger and poverty, and helping to provide food and education to 300 million malnourished children around the world.

Burisma Holdings is a privately owned oil and gas company with assets in Ukraine and operating in the energy market since 2002. To date, the company holds a portfolio with permits to develop fields in the Dnieper-Donets, the Carpathian and the Azov-Kuban basins. In 2013, the daily gas production grew steadily and at year-end amounted to 11.6 thousand BOE (barrels of oil equivalent  incl. gas, condensate and crude oil), or 1.8 million m3 of natural gas. The company sells these volumes in the domestic market through traders, as well as directly to final consumers.

Now put it all together and what happens next should be rather clear.

In a nutshell Ukraine (or rather its puppetmasters) has decided to let no crisis (staged or otherwise) or rather civil war, go to waste, and while the fighting rages all around, Ukrainian troopers are helping to install shale gas production equipment near the east Ukrainian town of Slavyansk, which was bombed and shelled for the three preceding months, according to local residents cited by Itar Tass. The reason for the scramble? Under peacetime, the process was expected to take many years, during which Europe would be under the energy dictatorship of Putin. But throw in some civil war and few will notice let alone care that a process which was expected to take nearly a decade if not longer while dealing with broad popular objections to fracking, may instead be completed in months!


Civilians protected by Ukrainian army are getting ready to install drilling rigs. More equipment is being brought in, they said, adding that the military are encircling the future extraction area.

The people of Slavyansk, which is located in the heart of the Yzovka shale gas field, staged numerous protest actions in the past against its development. They even wanted to call in a referendum on that subject. Environmentalists are particularly concerned with the consequences of hydrofracing, a method used for shale gas extraction, because it implies the use of extremely toxic chemical agents which can poison not only subsoil waters but also the atmosphere. Experts claim that not a single country in the world has invented a method of utilization of harmful toxic agents in the process of development of shale gas deposits.

Countries like the Czech Republic, the Netherlands and France have given up plans to develop shale gas deposits in their territories.

Not only them but also all-important Germany, which two weeks ago announced it would halt shale-gas drilling for the next seven years over groundwater pollution concerns.

Which clearly makes Ukraine, potentially the last place with massive shale gas deposits and no drilling ban, quite valuable to those who want to develop a major source of shale gas, one which reduces Europe's reliance on Russian gas even more, yet one whose future depends on one simple question: who controls East Ukraine?

Because what better way to accelerate "next steps" than to start drilling for gas in the middle of the Donetsk republic as a civil war is waging in all directions, and where public mood has shifted decidedly against the local "separatists" in the aftermath of the MH-17 tragedy.

The punchline: who will develop the gas field in conjunction with Shell (jointly owned by the Netherlands and the UK: the two countries that loathe Putin the most in the aftermath of the MH-17 disaster) which in May 2012 announced a tender for the right to develop the Yuzovka shale gas deposit?


Burisma, Ukraines oil and gas production holdings, also has the right to develop the shale gas fields in the Dnieper-Donetsk basin of Eastern Ukraine. The same Burisma where R. Hunter Biden, Joseph's son, was appointed a director two months ago. 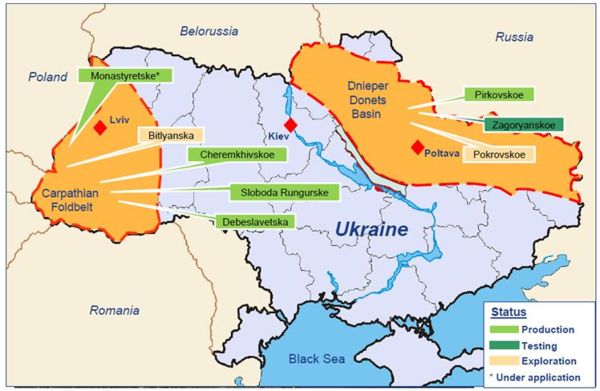 Patty
All the evidence a half way intelligent person needs.
http://www.globalresearch.ca/mh17-verdict-real-evidence-points-to-us-kiev-cover-up-of-failed-false-flag/5393317