I have to agree!

You are saying that Marxist Communists are not dictators? You have got to be kidding, you fool.

| Reply
Feb 13, 2020 11:33:45   #
useful mattoid 45
DASHY wrote:
Instead of calling Trump a "moron" or "idiot", call him what he really is: a conniving, corrupt con man, a dangerous, devisive demagogue. He is a man who with the help of his cult members and a little foreign interference cheated his way to win the 2016 election.

All of the above, plus a narcissist.

| Reply
Feb 13, 2020 11:34:53   #
no propaganda please Loc: moon orbiting the third rock from the sun
padremike wrote:
Simply because you have been fed that Trump is a dictator by your Marxist controllers, any thinking person would be smart enough to realize they could not impeach a dictator. Marxism, on the other hand, has made huge advances in our schools and your choice of political party. By your own admission it's more acceptable to you to be a marxists
communist than under a dictator. A true Patriot cannot compromise to accept either.

You are right on target, my friend.

| Reply
Feb 13, 2020 11:41:06   #
kemmer
no propaganda please wrote:
You are right on target, my friend.
I think it's pathetic the way the trumpskis toss around the term 'marxist' without the slightest evidence they know what the hell the term means except it's bad.

Funny, no rat in Republican.
Democ rat.
The Democ rat ic Party is one of the two major contemporary political parties in the United States.
The party describes itself as supporting American liberalism and American progressivism. ...
Democ rats support abortion rights and the LGBTQ+ community,
tends to support an easier pathway to citizenship for illegal immigrants.

| Reply
Feb 13, 2020 11:50:12   #
useful mattoid 45
America 1 wrote:
Funny, no rat in Republican.
Democ rat.
The Democ rat ic Party is one of the two major contemporary political parties in the United States.
The party describes itself as supporting American liberalism and American progressivism. ...
Democ rats support abortion rights and the LGBTQ+ community,
tends to support an easier pathway to citizenship for illegal immigrants.

The RATpublican party is lining their nests while the impotus removes regulations and gives tax breaks to the rich.

And they scurry away when a question from the media (does not include Fox) is asked.

Rats one and all, with the exception of Romney once in a great while.

They have zero integrity. And have shit-eating smiles on their faces for now.

The RATpublican party is lining their nests while the impotus removes regulations and gives tax breaks to the rich.

And they scurry away when a question from the media (does not include Fox) is asked.

Rats one and all, with the exception of Romney once in a great while.

They have zero integrity. And have shit-eating smiles on their faces for now.

Democ rats are the chief scurrier when confronted.
Maybe that is what you consider creating a smile,
can't imagine doing that would produce a smile.
If that works for you, great.

| Reply
Feb 13, 2020 11:57:21   #
Boo_Boo Loc: Jellystone
PeterS wrote:
Spoken like a true southerner. And I have to say, given our war with the south, who praytell was down there giving the polls! And yes, he was a weakling who kicked your sorry southern ass. In listening to your account I would say that that tender little ass of yours is still stinging a little bit.

But you do know that history is written by the winners, not the losers, which is why your man is going to go down as one of the worst presidents in history of our glorious country. As for the House, keeping him down, there are hundreds of bills sitting on McConnell's desk at this very moment. If anyone is keeping him down it would be his own man in the senate who won't even put through a bi-partisan bill on the price of drugs which Donald, the self-proclaimed King of all the America's, has said loud and clear that he would sign if it were sitting on his desk.

Your man is going to go down as the worst president in history because ours is a country--for all its faults-- WILL NO LET EVIL WIN! I mean look at our history. When southern conservatism rose up in all it's bigotted glory proclaiming that theirs was the right to own another man because, well, their entire worthless slave driven economy was built around it. Well, they were smashed and burnt to the ground!

And when your EVIL southern bigoted glory once again rose up in the form of Jim Crow and the KKK the good in this country once again rose up, and this time through laws, put your EVIL southern asses in the dust bin of history-- where it most deservedly belongs! Be it here in our own country or anywhere else in the world we have never let the fascist worst side of Conservatism win which is why the winners, who once again will be writing history, will proclaim your King Donald as the sorriest loser of all time.

And remember, History will write that you Conservatives WOULD NOT ALLOW any new evidence, or anyone else to speak, at King Donald's impeachment, which is the only reason that King Donald will have been around this long. Our country is built around the rule of law--a rule of law that protects right against wrong. Do you honestly think that your party and your King, which are now blatantly violating the rule of law will go down anywhere but in the worst possible light that can be written?

You Conservatives have trashed the most important part of our constitution and all for some petty two-bit worthless POS who dares to think he is KING! If out great General Washington wouldn't take such a position do you think History will speak well of someone who does? For all the brilliance of that grey matter in your head, there is something in you that skips over the most obvious and allows you to cling to the most grotesquely obscure...YOUR King Donald will be thought great by those who write only about Truth?!?! Methinks, your Conservatism, and Fox News, has rendered that a complete and total joke!
Spoken like a true southerner. And I have to say, ... (show quote)

I made it clear that there were no polls as seen today. The popularity of Lincoln was extrapolated from data provided in newsprint. Although the media was, and still are, biased, I used news from across the nation and mostly from Northern media, as I knew that some would be offended should I use any true Southern sources. I am sorry if you cannot handle the truth about your worshiped president. I would recommend that you visit the National Archives and immerse yourself in history written at the time. It would open your eyes to the horror of the northern Aggression and how it was unnecessary.

History is not always written by the winners, many times it is written by fictional writers. Sad, but true, most of the things you have come to accept about the Northern Aggression was written by individuals sitting in their Northern flats where they were waited on by their house negros. The vast majority never set foot in the South. Just as many today accept what they read on the internet as god given truth, so it was then that books sold for entertainment was not fact checked and later became the basis of propaganda. That propaganda oozed across the nation in a steady stream of abridged facts and later became the foundation of school lessons for the youth. Indeed, should the evidence be weighed, a good 80 percent of what you think you know is nothing more than disinformation based on what some want you to believe or think.

You make a grand statement, which I would love to believe, “ours is a country--for all its faults-- WILL NO(T) LET EVIL WIN!” Let us return to the war of Northern Aggression, as it was the intent of the thread. That war was pure evil, even down to the “setting blacks free.” Putting aside the barbaric actions of blood hungry generals, like Sherman, let us look at “freeing the slaves.” If this war was put into modern day concepts, the severing of all support for the blacks would be decried around the world as an act of lunacy. No safety nets, no long-term plan for easing those unfortunate souls into society, it was akin to dumping a hoard of uneducated preteens on the street and telling them to fend for themselves. Many did not survive, most took the path of least resistance, and a few went on to become self-sustaining honorable people. Those who took the path of least resistance still believe they are entitled to claim resources of our working class.

Let us look at your statement: “When southern conservatism rose up in all it's bigotted glory proclaiming that theirs was the right to own another man because, well, their entire worthless slave driven economy was built around it. Well, they were smashed and burnt to the ground!” To understand the “Southern Conservatism” you need to realize that slave ownership was not a white man’s construct, slavery was older than the newly established country yet to be named the United States. Ergo, the bigots of the South (black and white) was an extension of the bigots of black Africans who believed it was their “right” to hunt other black for sale into servitude. It was their economy that was partly built on that industry. However, the South did use slaves to power certain aspects of their agrarian culture. Motor vehicles was not yet invented, ergo no tractors, conveyor belts, no harvesters…the crops had to be planted and harvested by hand. Chief among these crops was cotton and sugar cane. And there is the base for the Northern Aggression. But I will let you figure out how the Northerners fueled the industry. Suffice to say, the North was the primary market for both crops and when the South began to ship those commodities to Europe, making a very competitive market, the North rebelled. They used slavery as a cover story, but fact is Northerners owned slaves well after the Northern Aggression. The truthful part of your comment “they were smashed and burnt to the ground!” You seem to have pride in this comment, and that is very telling about your skewed intellect for you are forgetting, the North devastated the South which included the “freed” blacks. The North robbed them of home and all associated means of honorable survival. The “Reconstruction” was a sham intended to line the pockets of politicians and their kickback prone companies of the North….keep in mind, this was a Democrat’s idea of how to handle 4 million uneducated blacks who found themselves penniless and dependent on charity and promises made by Yankees of 20 acres and a mule which did not materialize.

WHY, try the growth of the KKK underTrump, supporting Trump because he supports them. Yeah, this wouldn't be happening under a democratic president no matter how you'd like to spin it. 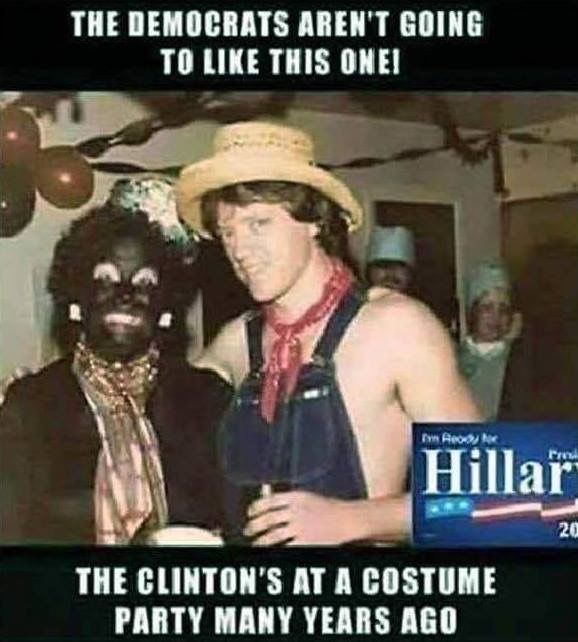 I know you believe in your wicked little heart that Conservatives are destroying the Constitution and the rule of law because you've heard this constant drumbeat from the very same mob who are destroying our heritage. You're the simple folk who if a lie is repeated frequently enough believe it. Would you care to offer proof or is a generalized statement sufficient to encase your programmed convictions in cement?