One Political PlazaSM - Home of politics
Home | Active Topics | Newest Pictures | Search | Login | Register
Main
Devout Muslims Throw Gasoline Bombs at Christian Shops Just Before Trial of Coptic Christian Accused of Blasphemy Against Islam
Jun 3, 2014 09:27:54   #
CharlesRabb
The Muslims who did this are supporters of the Obama-backed Muslim Brotherhood, which Obama tried to strong-arm the Egyptians into returning to power. The wholesale persecution of non-Muslims in Muslim societies on his watch, while he glad-handed the oppressors and said nothing about the persecution, will go down in history as one of the many, many blots on his feckless post-American presidency.

A security official in Egypt says a mob of angry Islamists has burned shops owned by Coptic Christians near the ancient city of Luxor hours before a trial for a Coptic Christian accused of blasphemy.

The attack came hours before the start of a trial in Luxor for Kerolos Ghattas, a young Coptic Christian charged with contempt to Islam over a series of alleged Internet postings.

The official spoke on condition of anonymity because he was not authorized to speak to journalists.

Christians make up about 10 percent of Egypts population. 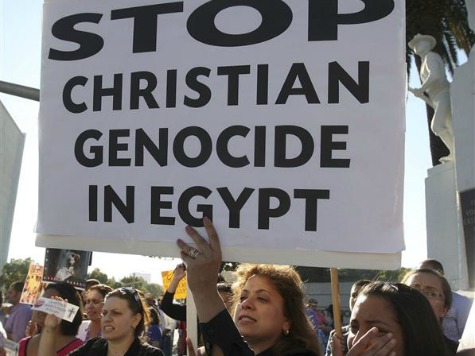