karpenter Loc: Headin' Fer Da Hills !!
That's My Christmas Present
I've Been Using It About 3 Wks Now
This Is An Unusual Piece Of Equipment

Using The Recommended Lump Variety Fuel
You Fill It To The Top Of The First Fire Ring
About 8#, Or Half A Large Bag In Mine

So I Took My Starter Chimney
Turned It Up-Side Down
Loaded It With About Ten Briquettes, As Usual
Got Them Fired And Poured Them In The Center Mass 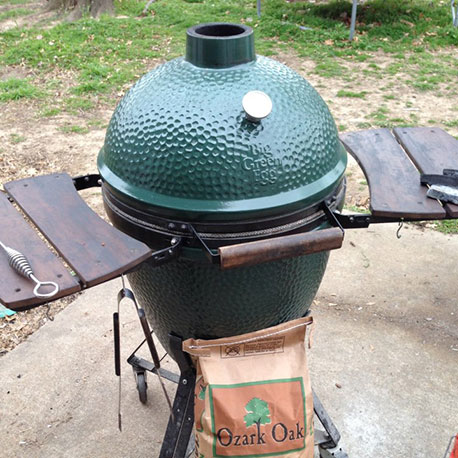 Reply
Feb 22, 2019 16:18:45   #
woodguru
I grew up using those in the 70's, my dad was in the air force and they did what they referred to as Hibachi runs to Japan. He was flying C-124's, they would literally have them full of Hibachi pots, everyone was picking them up for everyone they knew. The Yen conversion was so good that they cost about $6.00 each.

These things will cook the wickedest pork chops on the planet, use about 8/10 briquettes and they'll cook for half an hour to maybe 45 minutes, learn to cook slow with it and you can cut those pork chops with a fork.

I Used About 14 Briquettes
And The Last Of My Lump Stores
It Got Plenty Hot, 400 Degrees
I Don't Like Loading It Full-Up Every Time
Just To Grill Some Kabobs