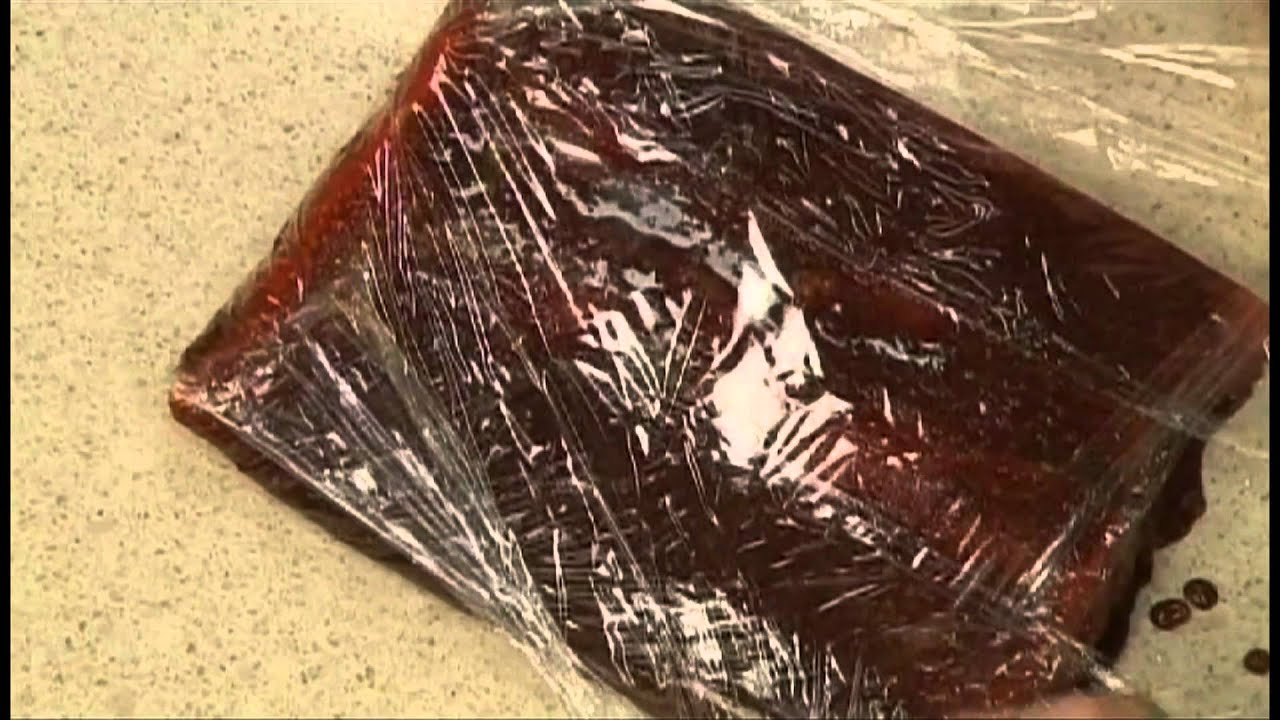 This cured salmon recipe is particularly interesting because the sweet molasses in combination with the dark soy sauce not only gives the salmon a very intense flavor but also colors the salmon flesh, making it almost black on the outside. When you slice it, the inside is a beautifully transparent gold and pink, contrasting dramatically with the black exterior and looking more like a smoked salmon, although no smoking is involved.

*The Salmon Fillet, preferably, should be a center cut, of even thickness throughout, with the skin on but the bones removed.

Lightly score the skin of the salmon in a lattice pattern so the salt, sugar & spices will penetrate through it to cure the flesh.
It is easier to cut through the skin if you hold the blade of the knife parallel to the fillet and run the entire length of the blade across the skin, instead of attempting to score it with just the tip of the blade.
Place the salmon in the center of a large piece of plastic wrap.

In a small bowl, mix together the salt, sugar, cumin, allspice, paprika, nutmeg, and cayenne pepper.
Spread the mixture evenly on both sides of the salmon, and wrap the salmon tightly in the plastic wrap.
Place it on a tray, and refrigerate overnight, or for at least 12 hours, to cure.

Unwrap the salmon, and remove it from the marinade. (It will have absorbed most of the marinade.)
Discard any remaining marinade, pat the fish lightly with a paper towel, and arrange it on a wire rack over a tray.
Refrigerate it for another 24 hours to dry it out.
At serving time, slice the salmon thinly on a slant, and serve two or three slices per person with buttered bread.
Garnish the salmon, if desired, with chopped onion, capers, and a drizzle of olive oil.

Another little technique I’ve observed, used by some very good sushi chefs, is the careful removal of the salmon skin before you slice the fillet. This is normally accomplished with a steady hand and a very sharp knife. The skin is then placed on aluminum foil and place beneath a hot broiler just long enough to crisp it. It is thin cut in a julienne-style and used as a delicious garnish.

Mix molasses and soy sauce together in a separate bowl.

Lay out a large piece of plastic wrap and place the salmon in the middle. Evenly spread spice mixture on both sides of the salmon. Then evenly coat both sides with the molasses mixture.

Wrap the salmon tightly and store in fridge on a tray for 24 hours.

The next day, unwrap the salmon and throw out any leftover marinade. Lightly pat the salmon with paper towels. Place the salmon on a rack over a cookie sheet and dry it out in the fridge for another 24 hours.

When ready to serve, slice the salmon at a diagonal. Garnish with the onions, capers, and olive oil. Serve with buttered black bread or crisped slices of baguette.

I've Always Used B. Sugar & Salt For Pacific Salmon
Let It Sit, Pour Off The Brine Syrup That Forms
And Let it Sit Some More

I'd Like To Try Something Different
This Might Fit The Bill
Have You Tried This ??
Is It Similar To Teriyaki ??