Sicilianthing
Send this the WhiteHouse and President Trump
Take Action
Do your JOB,
Do your part even if it's painful and uncomfortable..
It is your Duty as an American Patriot to defend the Republic.


Smug Muslim Tells Judge Its His right To Rape his wife".
This is why we do not need these aliens allowed in the U.S.

ISLAM:
" A Doctrine masquerading as a Religion for millennia based upon Laws ( Shari'a) , a Constitution ( the Qur'an) and an ideology that DEMANDS the death of ALL Jews, Christians and other infidels and is the most misogynistic society in the history of the world"

Long before todayâs anxiety about terror attacks, Spain and England feared that enslaved Africans would be more susceptible to revolt if they were Muslim

ISLAM WAS BANED from the USA in "1952, but Obama doesn't want you to know, nor did he respect or uphold US law.

The Immigration and Nationality Act passed June 27, 1952 revised the laws relating to Immigration, naturalization, and nationality for the United States.

That act which became Public Law 414, established both the law and the intent of Congress regarding the immigration of Aliens to the US and remains in effect today"

Among the many issues it covers, one in particular, found in Chapter 2 Section 212, is the prohibition of entry to the US if the Alien belongs to an organization seeking to overthrow the government of the United States by "force, violence, or other unconstitutional means,"

This, by it's very definition, rules out Islamic Immigration to the United States, but this law is being ignored by the White House,

Islamic Immigration to the US would be prohibited under this law because the Koran, Sharia Law and the Hadith all require complete submission to Islam, which is antithetical to the US government, the Constitution, and to the Republic.

All Muslims who attest that the Koran is their life's guiding principal subscribe to submission to lslam and its form of government.

Now the political correct crowd would say that Islamists cannot be prohibited from entering the US because lslam
is a religion.

It is time for the government to uphold it's written laws.

Make copies and send it to your local Mosque's

Drop off copies on the steps of Muslims in your community....

Make it known they are not wanted here and we are coming for them soon.

We are AT WAR 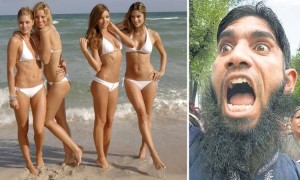