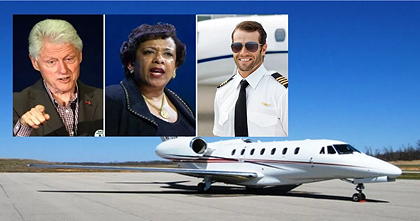 7/13/2017: “Pilot Who Heard Every Word Of Clinton/Lynch
Secret Meeting Breaks His Silence”
by DM Jones

"The pilot who flew the plane for the secret meeting between Bill Clinton, Loretta Lynch and, recently disclosed, Paul Ryan, is breaking his silence for a $2 million payday that is sure to put his life in danger. Dimitri Noonan, a pilot who has worked for the Justice Department for 25 years, has codeword clearance but says none of the meeting was classified, since officially it didn’t happen.

According to Noonan: “The three of them sat like old friends and discussed strategies and made treaties. Clinton’s crimes were to be set aside until his wife finished 2 terms of working with Republicans to shore up the base and ‘move away from these Trump loving racists’ as Ryan put it. Lynch would seal the deal by not investigating the Clintons further. Ryan gets to remain Speaker, the Democrats get the Senate and the White House and 2024 is up for grabs.”

Obviously there are many more details, many dark secrets and much more story to tell. The entire interview with Noonan will premier on Fox News on July 28th.”
[/img]https://1.bp.blogspot.com/-8eIjWDUUbSU/WWowatMHVqI/AAAAAAAB2T0/apL6vFuZId0qVc0Cn0NGs_PbKzZ7HI_RwCLcBGAs/s1600/2016-08-09-bd0b69fe_large-1.jpg[/img]
- http://ourlandofthefree.com/
○
7/14/2017: “Pilot Who Witnessed Secret Clinton/Lynch Meeting Found Dead”
by DM Jones

“Fox News was preparing their studio in DC for pilot Dimitri Noonan, the only man on the planet who knows exactly what was said between Loretta Lynch, Bill Clinton and Speaker Paul Ryan on Lynch’s plane on the tarmac that day last July, when the word came in. There will be no interview today; Noonan is dead.

Noonan was being held in a secure, undisclosed location by security professionals from Fox news. All are highly trained retirees from US Special Forces with multiple hand to hand kills in the field. How did someone sneak past them and manage to kill their man without making a noise? Unfortunately, only Mr. Noonan - and possibly a crook or two - know the answer to that question. What is certain is that whatever Noonan knew was juicy enough for Fox to want to put it on the air. Sean Hannity, speaking on his radio show, said: “I’ve seen what this guy had and it’s no ‘nothingburger.’ He was definitely playing with some serious firepower.”

The security team assigned to Noonan by Fox News was baffled when they discovered he was gone: “Whoever did this got past multiple layers of security and murdered the subject undetected in a secure location with zero unmanned escape routes. We’d say it’s not possible but we’ve all seen what the Clintons can do first hand, which is why we’re on this team. We believed we could keep him alive. We were wrong.”

Federal investigators know nothing at this point other than Noonan is dead. Cause of death is yet to be determined and there is nothing in the room he was found in to suggest foul play. We’ll keep you updated on the developing story.”
- http://ourlandofthefree.com/
◆
Related:
•"The Clinton Body-Count"
- http://www.whatreallyhappened.com/
•- http://www.inquisitr.com/